When Liz - a suburban housewife - discovers that her husband - Stephen - has been abusing their oldest daughter, she reports him to the authorities. He goes to prison for a year, then into rehab at a residential clinic for sex offenders. With his wife and family’s support, he undergoes intensive therapy. Eventually, with the full knowledge and co-operation of social services, the family is reunited and they decide to rebuild their lives together – something the daughter always said she wanted. A powerful, harrowing, provocative factual drama.

A brave, unsettling & commendable drama... Riddell's performance as Stephen is both slow and magnificent, as is Cohu's as Liz. This is impressive, low-key film-making.
Daily Telegraph

Although painful to watch, it would be hard to praise Paul Wilmshurst’s drama too highly. Adapted from a real case, a wife (Lucy Cohu) discovers that her husband of 18 years (Derek Riddell) has been systematically abusing their daughter. “What it felt like,” she says, “was my family having its guts wrenched out and ripped apart.” With two blistering performances at its core, Forgiven describes how she reacts and what happens to their relationship. Every stage of this terrible journey defies expectations and gives off the unmistakeable stench of truth. “You can’t understand,” she says, “and you can't comprehend - until it happens to you - how you will react or feel.” It is easy to condemn child abuse; it is far harder to understand it, to engage with the abuser and try to stop it. That is what this superlative drama is all about.
The Times 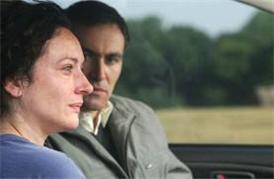