Set in the English town of Chelmsford in the year AD 123, the series concerned the power struggle between Roman governor Aulus Paulinus (Jimmy Mulville) and the British chieftain, Badvoc played by Rory McGrath.

Exiled to the cold, wet misery of Britain for accidentally insulting the Emperor's horse, the delicate Aulus finds himself up against the British people he knows almost nothing about. Worse still he is faced with the scheming celtic tribal leader Badvoc, who aside from constantly outwitting his Roman enemy had not had a haircut for 25 years. 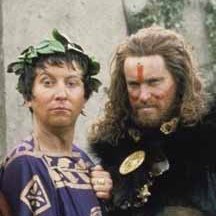