Rory McGrath and Paddy McGuinness make their way around Great Britain in a camper van; not just taking in the sights but taking part in an array of "strange but quintessentially British sporting events".

In each distinct region of Britain from Scotland to the Shires, the comedy duo competed against each other, and the wider public, in sports such as cheese rolling, dwile flonking and bog snorkelling. As the country was divided into four regions for the pair's competition, Rory and Paddy battled each other on the sports fields (or bogs) to become the champion at the end of each programme.

Media
Reviews
It makes a change to give these genuine characters airtime rather than the caterwauling wannabes we'll be seeing on this weekend's The X Factor auditions. Noam Friedlander
Metro
The best bit for me was beating Paddy at the dwile flonking in Lowestoft- putting a floor cloth soaked in beer on the end of a stick and flicking it at your opponent. Rory McGrath
The Sun 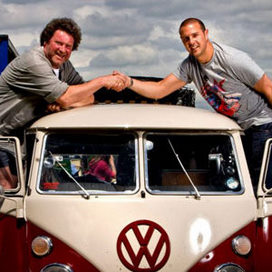