Ida Arnold, a kind-hearted and decent woman, is drawn into the action by a chance meeting with the terrified Hale, whom Pinkie murders in obscure circumstances shortly afterwards. Pinkie's attempts to cover his tracks lead to a chain of fresh crimes and to an ill-fated marriage to Rose, a waitress who has the power to destroy his alibi. Ida pursues Pinkie relentlessly, in part to protect Rose from the deeply disturbed boy she has married.

Set against the backdrop of 1960s Brighton and the ongoing youth riots between the mods and rockers Brighton Rock charts the seedy underworld of this seaside resort.

Media
Reviews
strong on atmosphere...a bold debut and certainly points to a talent to watch. Mark Adams
Screen Daily
(a) stylish adaptation Mark Adams
Mirror
Film of the week Danny Leigh
Film 2011
updated cleverly...The film has style, verve, craft and not least a knowledge of when to lie low and let Greene’s story speak for itself. Nigel Andrews
Financial Times Full Review
an intelligent and creative movie...a bold and exhilarating picture Peter Bradshaw
The Guardian
it is clear from the outset that [Rowan Joffe] is quite ready to blaze his own trail.
The Guardian
Brighton Rocks!
a superior piece of British film-making Matthew Bond
The Mail on Sunday Full Review
Film of the Week
a harmonious synthesis of overwrought melodrama and thematic intensity Laurence Phelan
The Independent Full Review
a clear-eyed, cool adaptation of Graham Greene's book for a new generation Kate Muir
The Times Full Review
Rowan Joffe’s Brighton Rock takes a genuine British classic and gives it a 60s sheen – the result is bold, compelling and visually razor-sharp. Danny Leigh
Film 2010
NYT Critics' Pick - Mr. Joffe has turned “Brighton Rock” into a full-scale film noir with the stylistic undertow of a more modern British gangster movie
Stephen Holden
New York Times 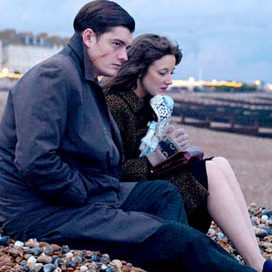