UK & Comm → Hodder and Stoughton (Ed. Nick Sayers)
US & Canada → Pegasus Publishing (Ed. Claiborne Hancock)
Oswald de Lacy was never meant to be the Lord of Somerhill Manor. Despatched to a monastery at the age of seven, sent back at seventeen when his father and two older brothers are killed by thePlague, Oswald has no experience of running an estate.

He finds the years of pestilence and neglect have changed the old place dramatically, not to mention the attitude of the surviving peasants. Yet some things never change. Oswald's mother remains the powerful matriarch of the family, and his sister Clemence simmers in the background, dangerous and unmarried.

Before he can do anything, Oswald is confronted by the shocking death of a young woman, Alison Starvecrow. The ambitious village priest claims that Alison was killed by a band of demonic dog-headed men. Oswald is certain this is nonsense, but proving it - by finding the real murderer - is quite a different matter.

Every step he takes seems to lead Oswald deeper into a dark maze of political intrigue, family secrets and violent strife.

And then the body of another girl is found.

A novel full of suspense and intrigue that will have you gripped.

It’s no fun reading a medieval mystery if it isn’t steeped in filth, squalor and pestilence. S. D. Sykes [...] serves it all up in vivid detail, from the noxious smells to an actual burial pit, heaped with the putrefying bodies of plague victims.

Marilyn Stasio
New York Times
Plague Land is a fascinating historical crime novel about a world turned upside down, inhabited by a rich cast of characters. A terrific debut and a wonderful start to a brand-new series Antonia Hodgson
author of The Devil in the Marshalsea Full Review 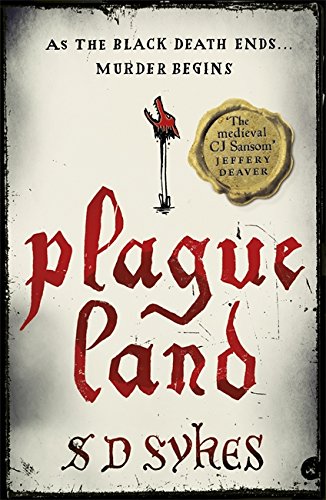