Lessons in the Pursuit of Excellence
​
People know who Steve Schwarzman is — at least they think they do. He’s the man who took $400,000 dollars and co-founded The Blackstone Group, the private equity firm that now manages over $434 billion. He’s the man Hank Paulson called for guidance during the height of the 2008 financial crisis. He’s the billionaire philanthropist who founded the Schwarzman Scholars program in Beijing, this century's version of the Rhodes Scholarship program. But these facts are too simple, and belie the struggles, rejection, and despair Schwarzman faced and conquered to achieve unprecedented heights.

With stunning candor and reflection, Schwarzman tells his life story, and the people who made him the man he is today. The most influential figure in his life wasn’t a business school professor, Wall Street banker, or foreign world leader; it was his high school track coach, who pushed him far beyond what he thought was his breaking point. Folding laundry in his father’s linen shop throughout school, Schwarzman dreamed of a larger life, filled with adventure and interesting people. Schwarzman’s grades and running ability got him into Yale, where he began to meet those people. He spent one summer working as an engine room wiper aboard a cargo ship, travelling through the Caribbean and South America, seeing a sliver of that larger world he wanted to be a part of.

After a six-month stint in Army basic training in Fort Polk, Louisiana, Schwarzman returned to New York and began working at Lehman Brothers. In vivid detail, Schwarzman recounts the cast of characters he met as he worked his way up the company and throughout the industry. He recalls teaching finance to a young General Electric employee named Jack Welch. He tells the story of how he singlehandedly engineered the sale of Tropicana for $400 million on behalf of Lehman. He was promoted, and became a Managing Director at the age of 31. From there, he continued this ascent, eventually partnering with his mentor and good friend, Pete Peterson, to travel the world seeking financing for their joint venture called “Blackstone."

A memoir filled with practical wisdom, Schwarzman’s story is an empowering, entertaining, and informative guide for anyone looking to strive for more. Rare is the opportunity to look behind the curtain at such an unparalleled success story. Schwarzman not only offers thoughtful reflection on all he’s achieved, but provides a blueprint for readers, giving them access to one of the most extraordinary minds of our time.

Jake Smith-Bosanquet manages the translation rights for What It Takes

Part memoir, part playbook for success in any field. Humble, candid, funny and real, Steve offers wisdom and the gift of much needed common sense chapter by chapter and experience by experience. A great read!

What It Takes is a must-read book, filled with the experiences of one of the great business success stories of the last 30 years – Blackstone. In this book, Steve Schwarzman chronicles his personal and Blackstone’s journey to the top of global business. The book is filled with fresh insights and personal experiences that everyone – from students to CEOS – will relate to and learn from.

In his new book, Steve relives his vast and varied experience at the center of a (thick) slice of US and global financial history. In the process he sets out a number of timeless lessons for business and life. This story literally has what it takes: the anecdotes, the insights and, most of all, the values to guide the next generation of entrepreneurs.

Mark Carney, Governor of the Bank of England

What it Takes is a “must read,” inspirational account of how Stephen Schwarzman built Blackstone into one of the world’s top global asset management companies and leveraged his resources, know-how and vision to spearhead bold philanthropic programs and provide trusted advice to a generation of political leaders.

Steve Schwarzman, whom I consider a rare global business statesman, has a unique ability to connect with others and has developed a very strong network of global leaders and institutions to help advance big ideas. His business and philanthropic efforts will have long-lasting impact around the world. What It Takes tells the story of lessons he has learned at every stage of life which offers great advice for anyone from the C-suite to the classroom looking to leave their mark. 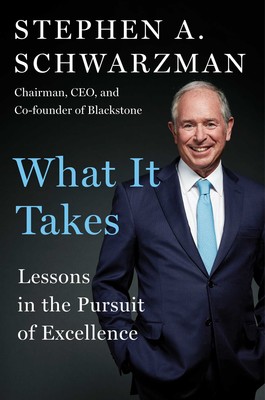