Trenton Makes tells the story of a woman who kills her husband in a commonplace domestic brawl and takes on his identity, living out the rest of her days in his legacy, as a man, Abraham Kunstler. With painstaking care, Kunstler morphs himself into a compelling simulacrum of a man and secures work in the wire factories of Trenton, New Jersey. Crippled by paranoia of being discovered, he remains an oddity and outsider in the eyes of his fellow workers, and becomes obsessed with producing an heir, a boy.

Koelb’s innovative but gripping narrative pays homage to American literary heroes like William Faulkner and John Steinbeck, and contemporary icons like Toni Morrison, Cormac McCarthy, and Ann Carson. It is a daring investigation into the nature of identity, and a disturbing portrait of the desperation manufactured by a culture of inequality.

The audio rights are handled by Doubleday.

The honed-steel sentences on display here - vivid and sharp and scarily persuasive - are all the more harrowing for the vulnerability they manage to convey. Abe Kunstler is a singular protagonist, and Trenton Makes is a passionate and original first novel.

A novel of bewitching ingenuity, one whose darkling, melodic mind conceives a world of ruin and awe ... It asserts its authenticity in the plinths and joists of its architecture, in the bold intricacies of character and plot, but also in the only spot that matters: the prose ... a novel worthy of not only New Jersey but of that excessive fluorescence called art.

With that scrupulously acquired voice, he deftly confronts gender, identity, and socioeconomic limits to create a piercing tragedy of a life caught between free will and utter desperation.

This is a peculiar, gripping book, and Koelb’s is a distinctive voice … Trenton Makes is a fascinating interrogation of the industrial American dream.

In Trenton Makes, his fever dream of a debut novel, Tadzio Koelb puts a gothic, shocking spin on the effects of mid-century American masculinity and the fragile scaffolding that has kept it upright.

Tadzio Koelb’s manic, panicked novel of identity, Trenton Makes, is the claustrophobic journey of the new Abe ... Trenton Makes is less a novel about passing than one of invention and creation.

In post–World War II New Jersey, an abused Rosie the Riveter wife doesn’t just hit back at her husband. She kills him, disposes of his body, and assumes his identity in this transgressive, barbed-wire-sharp debut novel.

This is the story of courage, of knife-edge need, of a battle to be oneself and stay oneself. Tadzio Koelb’s imagining of his unforgettable protagonist is as tough as it is compassionate; his prose seduces not just because it is stunning, but because it is uncompromising in its pursuit of one character’s mutilated truth

This is storytelling on steroids. Tadzio Koelb is a writer’s writer, and his densely packed and evocative novel is as thrilling as it is disturbing. Trenton Makes invokes our post-postmodern world, an intensely claustrophobic space, where identity remains fluid and reality is what you make it. I thought of Gogol as I read this, and Dostoyevsky – just to name a couple of his ancestors. Language itself is, as much as anything, the protagonist of this gritty, even hyper-real novel, which stays in the head like all good fiction, this waking dream.

Koelb is insightful... about how short the era of triumphant white American manhood was and its tendency to fight a rear-guard action that hurts men and those they love

Trenton Makes offers an unconventional look at masculinity and its cultural baggage ... Trenton Makes is being released as the country is in the midst of an intense cultural discussion over sex, gender, and privilege. Though it is set decades in the past, its themes are timely and pertinent.

Koelb’s imaginative novel of the ruse of identity in the post-war world is a powerful and resonant metaphor for a crumbling city and a society in flux.

What a pleasure to read a novel so uncompromisingly cut from the same startling bolt of literary cloth used by writers like Djuna Barnes, William Faulkner or James Baldwin. Abe Kunstler is as striking a key character — and Koelb’s depiction of him as challenging and rewarding in its execution — as Barnes’ Robin Vote, Faulkner’s Joe Christmas or Baldwin’s Sonny. This is writing, in short, that takes its reader most seriously. 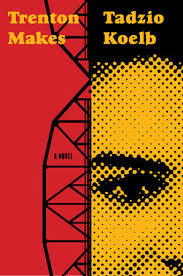