Haynes returned to the helm of the show after directing the gripping two-part finale of Matt Smith's first series as Doctor Who and directed the opening block of the new series.

In a festive edition of the time-travelling adventure written by Steven Moffatt, newlyweds Amy (Karen Gillan) and Rory Williams (Arthur Darvill) are trapped on a crashing space liner, and the only way The Doctor (Matt Smith) can rescue them is to save the soul of a lonely old miser, Kazran Sardick, played by veteran actor Michael Gambon.

Media
Reviews
Doctor Who directors rarely get the credit they deserve, and Haynes deserves lots of it. His opening post-credits shot, for instance, is a real treat, and his camera adds to the Dickensian feel superbly well. Simon Brew
Den of Geek
Christmas TV: Doctor Who
Achingly affectionate, ceaselessly witty, beautifully shot and perfectly cast Caitlin Moran
The Times Full Review
a sumptuous triumph from start to finish
The Guardian 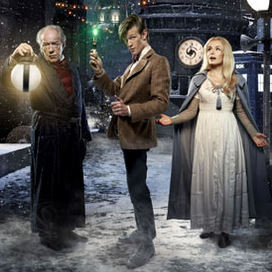