It’s been five years since Turia Pitt made headlines for having barely survived her ordeal in the desert. And in that time, she has become one of the most inspirational women in Australia.

Whether via the numerous media reports, 60 Minutes specials, Women’s Weekly cover stories or her first book, Everything To Live For, we know about the why, how and what of that fateful day in September 2011. We know how she died four times on the operating table and her tortuous road to recovery. We’ve had a glimpse of the love of her boyfriend, Michael, that sustained her, and seen hints of the inner-strength that has made her one of the most admired women in the country. But until now, the true essence of this most remarkable Australian, plus the toll her accident has all taken on her and those around her, have remained a mystery.

How and why does she push herself to ever greater physical and mental limits? What does she see when she looks in the mirror? How does her sudden celebrity (for the most unorthodox of reasons) sit with her? What lessons has she learned in the past five years? And, crucially, how can each and every one of us take those lessons and apply them to our own lives?

More than a simple chronology of events – and against the backdrop of a never-ending series of impressive physical feats, including climbing the Great Wall of China, walking the Kokoda Track and competing in not one but two Ironman competitions – this book unmasks the real Turia: funny, fierce, intelligent, flawed.

With the benefit of hindsight and five years’ worth of getting of wisdom, Turia is only now able to account for how she prevailed where others might have faltered. And for the first time, in this book we get to know the people who – by Turia’s own admission – made her recovery possible.

Unmasked will reveal the woman behind the headlines, and in so doing, uncover the grace, humour and inner-steel that gets Turia Pitt through every day – and which leaves the rest of us watching on in amazement. 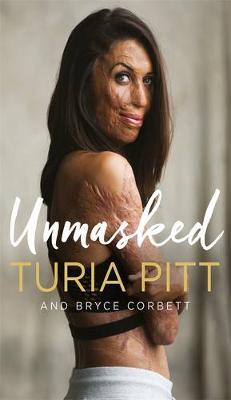