Tell Me How It Ends

A gripping drama of toxic female friendship, manipulation and revenge, for fans of Patricia Highsmith and Tangerine

Delia Maxwell is an international singing sensation, an icon of 1950s glamour who is still riding high on the new 60s scene. Adored by millions, all men want to be with her, all women want to be her. Except for one woman who wants it maybe a little too much...

Lily Brooks has watched Delia all her life, studying her music and her on-stage mannerisms. Now she has a dream job as Delia's assistant - but is there more to her attachment than the admiration of a fan? Private security investigator Frank is beginning to wonder.

As Lily steps into Delia's spotlight, and Delia encourages her ambitious protegée, Frank's suspicions of Lily's ulterior motives increase. But are his own feelings for Delia clouding his judgement? The truth is something far darker: the shocking result of years of pain and rage, rooted in Europe's darkest hour. If Delia thought she had put her past behind her, she had better start watching her back.

A nuanced and moving portrait of ambition, manipulation, and the emotional havoc created by those unable to escape the past, set against the heady, soon-to-be-lost glamour of early 1960s showbiz.

Delia, the heroine of V. B. Grey’s gripping and subtle novel, is a fabulous study in ambivalence, guilt and yearning, and her portrait of Sixties London – a melting pot for the war-damaged, the ambitious, as well as the decent – is terrific.

I loved this elegant and enthralling novel, with its clever shades of All About Eve and A Star is Born. Beneath the surface glamour of early-Sixties showbiz, the devastating personal histories of Delia, Lily and Frank continue to haunt and torment them. Who, if any, will triumph? A spellbinding read.

Tell Me How It Ends is a gorgeously written novel which evokes the atmosphere and glamour of old Hollywood, while including utterly modern themes. Best enjoyed with a dry martini and some jazz on the (vinyl) record player.

With obvious debts to both A Star is Born and All About Eve, this is the full-on book equivalent of a classic Hollywood "woman's picture".

With clear homages to film noir, this intriguing read will grip you from the start.

Inspired by women-centred narratives and the noir thrillers of the 40s and 50s, Grey invites readers into a glamorous, dark world of ambition, manipulation and revenge.

Clever, generous and imaginative, this is an excellent crime novel.

Takes elements of classic mystery novels with the glamour and pizzazz of celebrity and turns both on their heads. Captivating. 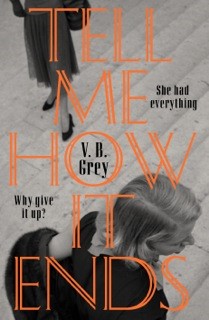