Purple is the colour of violence, passion, penance and panache; the symbolic shade of kings and emperors, of cardinals and popes. It is also the punch-drunk colour of Wendy Perriam's extraordinary novel which combines outrageous sex with radiant religion, redeems sin with resurrection and capsizes comedy with shock.
Thea Morton, the crazed yet childlike heroine, seeks her absent father in every man she meets. Having rejected the kindly, bookish Adrian with his stifling economies and pedantic word-power, she taunts and worships Leo - darkly violent and disturbingly erotic - who lands her in hospital with broken teeth and bloody mouth. Disillusioned with mortal men, she turns to priest and God, seeking to seduce the one and consume the other.
In her quest for God and father, Thea travels to the Marian town of Lourdes, that hopeless, hoping shrine of the Catholic church, where, in seeking a miracle she is granted instead a mission so shocking and stupendous, it changes the whole tenor of her life. St Bernadette herself becomes a character in a novel which adds the supernatural to an already powerful range of themes.
Thea crumbles, along with the Marian shrine. Returning from Lourdes already shocked and chastened, she finds her world at home disintegrating, and her last spiritual refuge becomes a violent sexual nightmare.
After Purple is a tale of sex, violence and religion, with a strong dose of comedy to wash it down. But the deeper levels and underlying symbolism give Wendy Perriam's always fertile imagination a new force and power.
'An extravagant big dipper of a book . . . displaying a boldness, and exuberance and sharpness of eye . . . not for the weak of stomach.' The Times
Rights 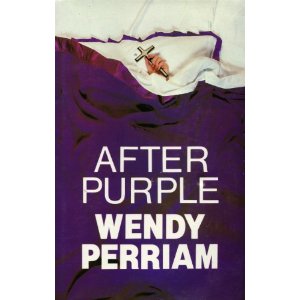