What is the devastating effect on your life when, through no fault of your own, you lose everything - home, family, friends, job, reputation, passport, money, credit cards, mobile phone - and you can never get them back?

This is what happens to a young man called Adam Kindred, one May evening in Chelsea, London, when a freakish series of malign accidents and a split-second decision turns his life upside down for ever. The police are searching for him. There is a reward for his capture. A hired killer is stalking him. He is alone and anonymous in the huge, pitiless modern city. Adam has nowhere to go but down - underground.

He decides to join that vast army of the disappeared and the missing that throng the lowest level of London's population as he tries to figure out what to do with his life and struggles to understand the forces that have made it unravel so spectacularly. His quest will take him all along the River Thames, from affluent Chelsea to the sink estates of the East End, and on the way he encounters all manner of London's denizens - aristocrats, prostitutes, priests and policewomen amongst them - and version after new version of himself.

William Boyd's electric follow-up to Costa Novel of the Year Restless is a heart-in-mouth conspiracy novel about the fragility of social identity, the scandal of big business, and the secrets that lie hidden in the filthy underbelly of every city.

A mini exploration of the nature of modern citizenship combined with a picaresque tour of the various strata of modern metropolitan life.  The Guardian

A storm of a story... London has never looked so threatening

I can't remember when I had a more exciting read than Ordinary Thunderstorms... It's about a nightmare that might happen to any of us 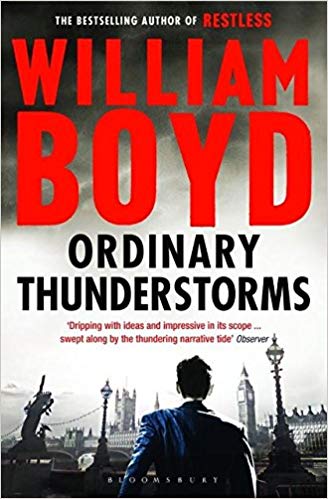