Amory's first memory is of her father standing on his head. She has memories of him returning on leave during the First World War. But his absences, both actual and emotional, are what she chiefly remembers. It is her photographer uncle Greville who supplies the emotional bond she needs, and, when he gives her a camera and some rudimentary lessons in photography, unleashes a passion that will irrevocably shape her future. A spell at boarding school ends abruptly and Amory begins an apprenticeship with Greville in London, living in his tiny flat in Kensington, earning two pounds a week photographing socialites for the magazine Beau Monde. But Amory is hungry for more and her search for life, love and artistic expression will take her to the demi monde of Berlin of the late 20s, to New York of the 30s, to the Blackshirt riots in London and to France in the Second World War where she becomes one of the first women war photographers. Her desire for experience will lead Amory to further wars, to lovers, husbands and children as she continues to pursue her dreams and battle her demons.

In this enthralling story of a life fully lived, William Boyd has created a sweeping panorama of some of the most defining moments of modern history, told through the camera lens of one unforgettable woman, Amory Clay. It is his greatest achievement to date.
Rights

His eccentric wit and restless intelligence exert a powerful appeal.

The energy and inventiveness of Boyd's storytelling is breathtaking

The London Review of Books

psychologically rich characterization, a wealth of atmospheric details...add depth, immediacy, and authenticity to an engrossing, moving story of Amory’s turns of fortune.


The novelist's new mystery is his best in years


Sweet Caress is an audacious, sweeping, rich layer cake of a novel, at once a textual hall of mirrors and a brilliant tale of a life well lived.

it’s beautifully written, perfectly paced and moves deftly between poignancy and humour ... his best book since Any Human Heart 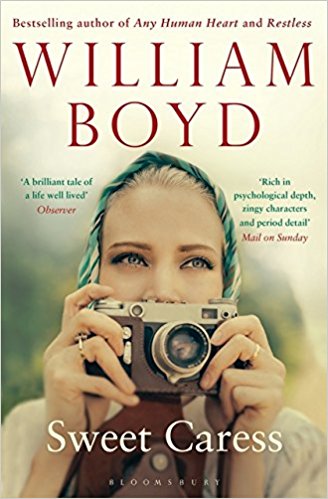