Vienna, 1913. Lysander Rief, a young English actor, walks through the city to his first appointment with eminent psychiatrist, Dr Bensimon. Sitting in the waiting room he is anxiously pondering the particularly intimate nature of his neurosis when a young woman enters. Lysander is immediately drawn to her strange, hazel eyes and her unusual, intense beauty. Her name is Hettie Bull. Their subsequent affair is both passionate and destructive.

Moving from Vienna to London’s West End, from the battlefields of France to hotel rooms in Geneva, Waiting for Sunrise is a feverish and mesmerising journey into the human psyche, a beautifully observed portrait of wartime Europe, a plot-twisting thriller and a literary tour de force.

Helen Manders manages the translation rights for Waiting for Sunrise

[Boyd] has written a fine example of what Graham Greene termed "an entertainment"; one that skilfully reimagines a carnival on the brink of destruction and a man teetering on fate's tightrope.

Christian House
Independent
As ever with Boyd there is an effortlessness to the prose and a piercing acuity to the period detail and evocation of place, along with thrilling set pieces... Waiting for Sunrise proves that rarest of beasts: a tantalisingly experimental work that is also an immensely satisfying page-turner. Adam O'Riordan
Daily Telegraph
This assured psycho-sexual tale segues from Kafka to Le Carr&eacute; and reads almost like a homage
Waiting for Sunrise, which starts in the world of Kafka and Schnitzler, ends in a world so Le Carré-esque it reads almost like a homage… After the intriguing psycho-sexual foreplay of the first section the remaining four parts constitute a literary thriller that genuinely thrills, a plot-driven novel assembled by a master of plotting. The deftness with which Boyd knits together a complex cast of characters across scattered locations and an extended time period is immaculate… It demonstrates yet again this writer’s unrivalled versatility and consistency. William Sutcliffe
Financial Times Full Review
[Waiting for Sunrise] is superb; hand-on-heart, may-the Lord-strike-me-down terrific… To read a William Boyd novel is to open a bottle of wine, light a fire, sit back in your favourite armchair and trust that the master practitioner will take you on an intriguing and unpredictable journey. He’s been doing it for years and with Waiting for Sunrise he’s done it again. Charles Cumming
The Spectator
Waiting for Sunrise is a gleeful celebration of storytelling — sly, clever, frequently hilarious, always involving. Central to Dr Bensimon’s parallelism is the philosopher Henri Bergson’s concept of the fonction fabulatrice — the mythmaking faculty we all possess to some degree. Boyd has it in spades, and for me at least this is the literary event of the year.
John O'Connell
The Times Full Review
It's ages since I read a novel that offers such breathlessly readable narrative enjoyment, such page-by-page storytelling confidence and solidity. Boyd has a positive genius for pace and description. John Walsh
The Independent Full Review
"As pleasurable as a book can be. The plot is irresistible." Sarah Sands
The Financial Times Full Review
An absorbing spy novel that raises provocative questions.
Publishers Weekly (starred review) Full Review 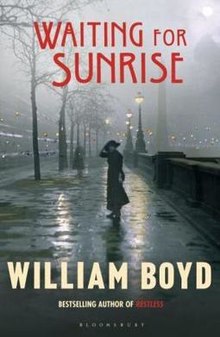